The problem we are addressing here is when the installation of an HP printer driver fails, resulting in error messages like “driver fatal install”, or “fatal error during installation”. Further error details can contain file names, error codes, or version mismatches.

You can also see the following errors:
“The drivers for this device are not installed (Code 28). To reinstall drivers, click Reinstall Driver.”
“Fatal Error 2753 — MSI.dot4wrp”

In most cases, driver installation errors can be solved by simply reinstalling the software again, sometimes a reboot is required before attempting the installation again.

In addition you can remove the HP printer in the Devices and Printers section of the Control Panel.

If, however, the HP printer software installation failed in an early stage, the software might not show up in the Control Panel uninstall list. That means the removal of the failed software will not be possible that way. The next thing to try in that case is to use a cleanup utility to fix the corrupted registry. Microsoft used to have the Windows Installer Cleanup Utility for this purpose, but due to conflicts with Office 2007, it was replaced by the Microsoft Fix It solution.

The Fix It solution will clear bad registry keys that can prevent programs from being installed. Keep in mind that it does not actually remove any files from the failed HP driver installation. Those will simply be overwritten by the next installation. Instead of the Microsoft solution, you can also try using a program to scan and fix the complete Windows registry, which does not limit itself to installer issues only. You can use such a program to clean all HP entries from your system before attempting the reinstall. We recommend using PC Cleaner for this purpose, you can download the program here.
Note: by Choosing to install PC Cleaner (5.72MB), you consent to it’s End User License Agreement and Privacy Policy of the site.

If you are running XP or Vista, it is also possible that the Windows Installer itself is corrupted. In that case you can simply try to download the Windows installer and reinstall that.

If reinstalling the Windows Installer is not possible, try to re-register it:

For HP Officejet printers, HP used to offer a driver removal utility that could help you remove the HP printer driver for specific models. Unfortunately, this utility is no longer available from them.

Other steps that can help:

– Run a disk cleanup to clear out the temp folders, which are used for temporary installation files.
– Stop the HP services using the Manage Computer option to prevent DLL files being locked.

After the install cleanup is finished and the Windows installer is fixed, you need to reinstall the HP Printer driver software. Unplug the HP Printer and reboot before you do this so that Windows does not install any default drivers for the HP device. During installation, you can reconnect the printer when the installation process indicates it. Please consider that even for wireless printers you sometimes need to make a physical connection with the PC during the initial installation. Please check the printer manual for details.

If installation still fails, and you are using a USB connection, try using a different USB port, and make sure not to use an external USB hub between the PC and the HP printer.

Although a lot of HP Printers are supported even under Windows 10, not all HP printers will work. Especially older printer models have no direct support under Windows 10, more so when it is the 64-bit version.
There are a few things you can try to get an HP printer to install in Windows 10 anyway.
The first is to try and run the printer installer in Compatibility Mode. Simply right-click the driver installer file and in the popup, select Properties. 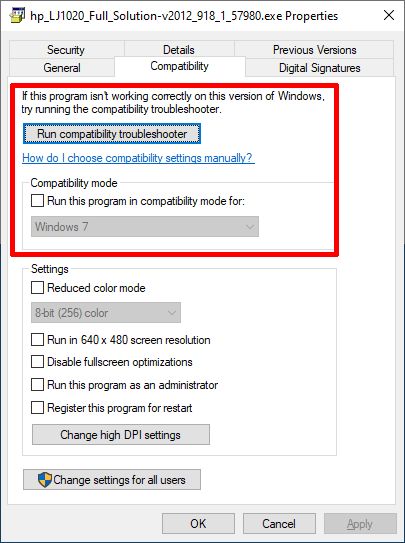 In some cases this method works, even though not all printer functions might be supported due to compatibility issues (often the case with printer/scanner combinations).

If the printer is not supported at all, even with the compatibility mode, you can choose to use a Virtual Machine (VM). In the Virtual Machine, you then run a version of Windows that still has support for your HP printer. The advantage is that you can still use the printer, the disadvantages are that you need to first still have a version of Windows that supports your printer, and you need to run the VM for all print functions, which means transferring all documents to be printed between the host (Windows 10), and the VM. Apart from being a complex solution, this is not a very convenient solution, so it is only interesting in a few scenarios.

To use a virtual Machine in Windows, you can use the Oracle VirtualBox software or the VMware Workstation Player. Both are free.

Lastly, always make sure to use the latest HP driver software, to guarantee that you are not suffering from old versions with possible bugs or limited functionality. To scan your PC for all drivers and find HP updates, use DriverFinder!

Emma Gibson
Hello all! I'm Emma Gibson and I'm a work-from-home Technical Writer of over 10 years. I write for the DriverFinder site, and have provided thousands of short, step-by-step 'How To' content for the Customer Support portals of various US companies such as HP, Symantec, System Center, Cherwell, and others.

When I'm not writing 'tech stuff', I'm mostly likely to be found in the kitchen testing recipes, or outside sporting (to get rid of those calories I consumed while in the kitchen).

Hello all! I'm Emma Gibson and I'm a work-from-home Technical Writer of over 10 years. I write for the DriverFinder site, and have provided thousands of short, step-by-step 'How To' content for the Customer Support portals of various US companies such as HP, Symantec, System Center, Cherwell, and others. When I'm not writing 'tech stuff', I'm mostly likely to be found in the kitchen testing recipes, or outside sporting (to get rid of those calories I consumed while in the kitchen). View all posts by Emma Gibson